A few hours ago I looked at the implementation of List.map, which looks like this:

however, for me it seems that foldr is not tail-call optimizable. So I tried another version:

The additional List.reverse does not seem to be a problem on Firefox as the following animation shows:

On Chromium this is slightly different and the benefits of the foldl version seem to start for lists larger than 500. Below that the original List.map seems to perfom better, but less than 5%. However on Firefox the results seem to be constantly better on average 25%.

Only for curiosity, I added a local List.map1 function that does the same as List.map but it uses a Kernel function … The patches look like this:

I have no idea which optimizations might be performed by the compiler with longer pipes of List.maps, etc. Although I had tested it with pipes also and it seems to be promising. But maybe this is an optimization that can be added to the core libs, not only into List … 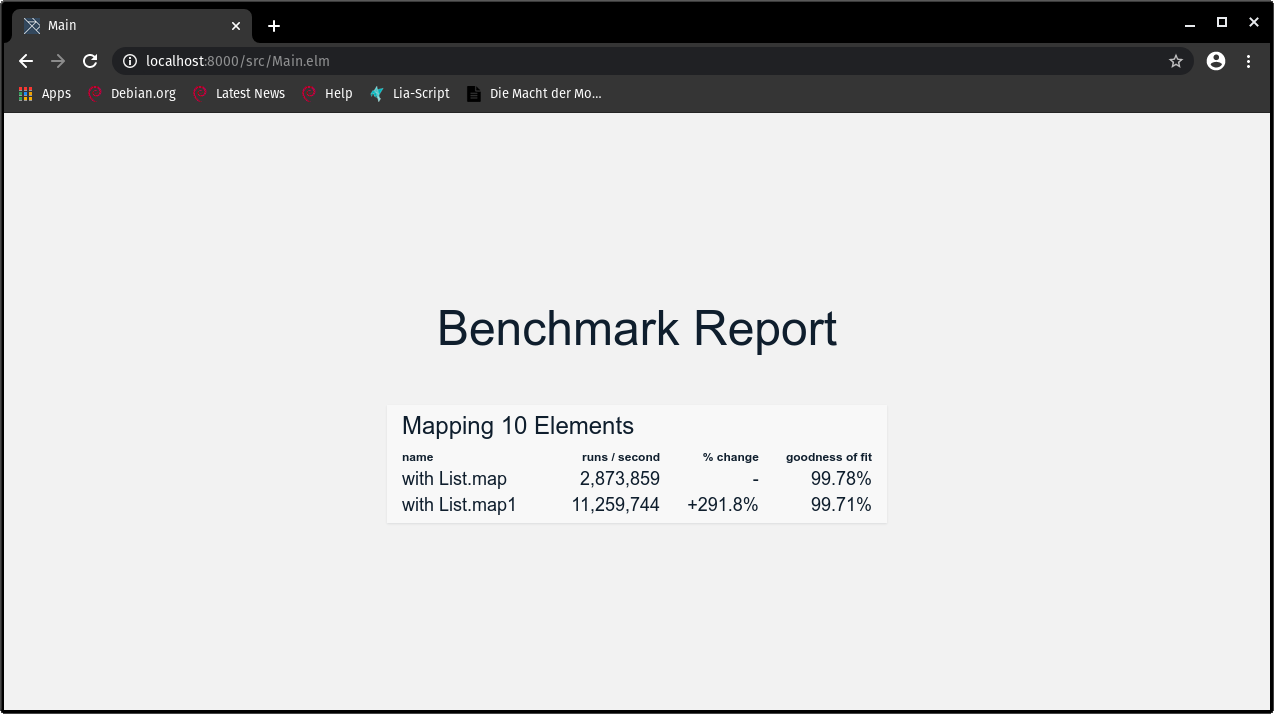 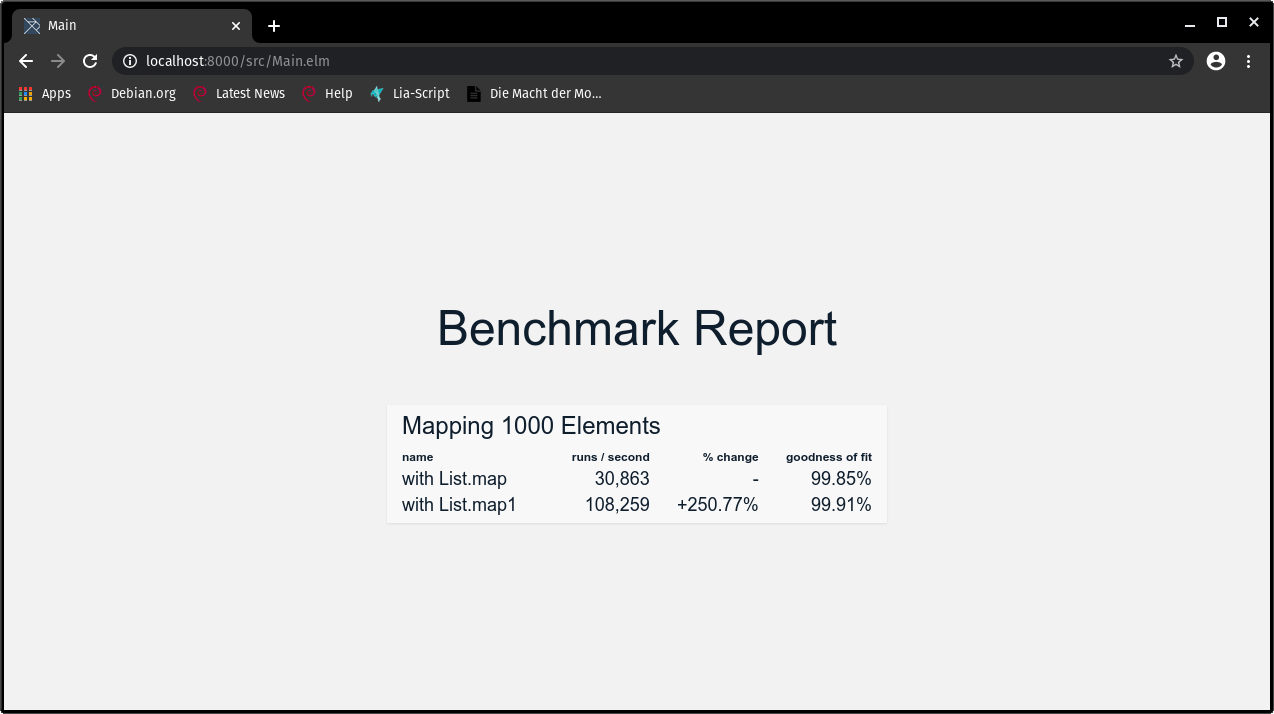 I’m using elm-optimize-level-2 for applying this sort of optimizations - I don’t know if you’re aware of the project, but it’s in the same space as the exploration you’re doing, and your work could probably find a home there!

Thanks for mentioning this project, I was playing around with it on an earlier stage, some time ago … This is a good idea, I will have a deeper look and create an issue, maybe they are already using this kind of optimization …

Cool! Yeah, an alternative List.map implementation was brought up a little while ago which might be interesting to compare: A faster `List.map` for Elm

That’s currently in elm-optimize-level-2, though I still need to do a release for it.

I have seen, that elm-optimize-level-2 already does this kind of optimization as native F2 function … haven’t been aware of … I will use it definitely in the future …

I played around a bit with different kinds of function definitions, and it turns out (I guess its quite obvious) that the simple pattern :

generates the most performant code … I tried this out with different List-functions and for different sizes. You can try this out here, checkout the project GitHub - andre-dietrich/elm-blist and with cd benchmark and elm reactor you can try it out by yourself.

However, I tried to reimplement map, filter, indexedMap, partition, and unzip and I got performance boosts up to 300% and more (at least on Chromium). Firefox and Web as an Safari-alternative performed also better … Well in this case 100% means that it is two times faster compared to the original implementation, so 300% will be 4 times faster… I hope I am not mixing something up … However I did not check the Memory-consumption so far… 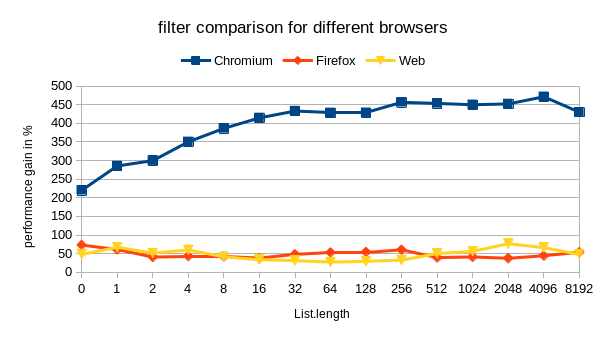 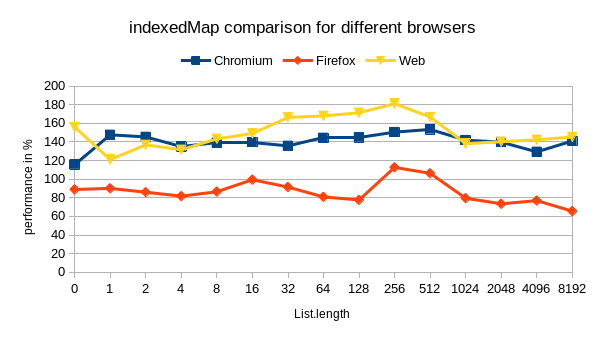 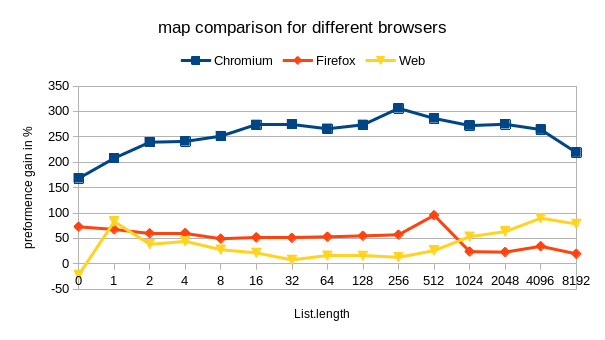 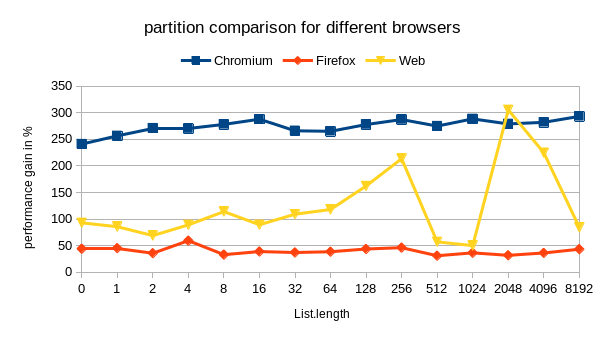 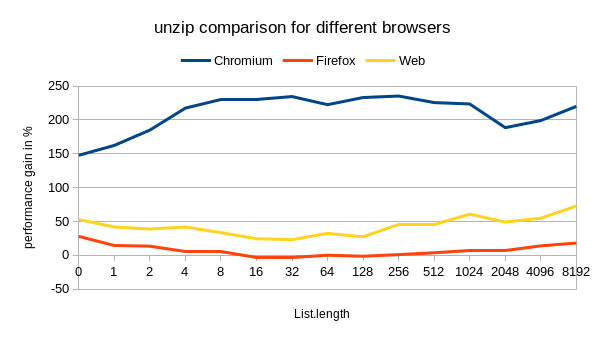 Nice! You might try it out against the implementation in elm-optimize-level-2, which is here:

The elm-opt-2 version is able to get away with not having to do the List.reverse at the end. (though of course we’re in JS land)

It seems that elm-opt-2 is performing better (the core function in this case are the optimized functions):

Note: I used elm-optimize-level-2 to generate the code, but after looking on the generated source-code, I could not find the new List-core functions, so I added them manually.