Elm-pubgrub: a state of the art dependency solver, in elm

I’ve been working for quite some time on an Elm implementation of a state of the art dependency solver called PubGrub, and it’s finally at a state where I can share all this with you. The result is the elm-pubgrub package (which is not published yet).

Special thanks to @harrysarson , @avh4 and @malaire who have helped me along the way. I’ve copied the readme below if you want to know more about it.

This package provides an implementation of the PubGrub version solving algorithm in the Elm programming language.

It consists in efficiently finding a set of packages and versions that satisfy all the constraints of a given project dependencies. In addition, when that is not possible, PubGrub tries to provide a very human-readable and clear explaination as to why that failed. Below is an example of explanation present in the introductory blog post about PubGrub (elm-pubgrub is almost there ^^).

The algorithm is generic and works for any type of dependency system with the following caracteristics, not only Elm packages.

Two examples are located in the examples/ folder. The conflict_resolution example, is a rather simple usage of the library with a custom dependency system (not Elm packages). You can start it easily with elm-reactor or elm-live.

The second example is an advanced usage of the library API, in order to create a dependency solver for actual Elm packages. You can build it locally with elm-live src/Main.elm -- --output=Main.js or just try it online directly at https://mpizenberg.github.io/elm-pubgrub/. 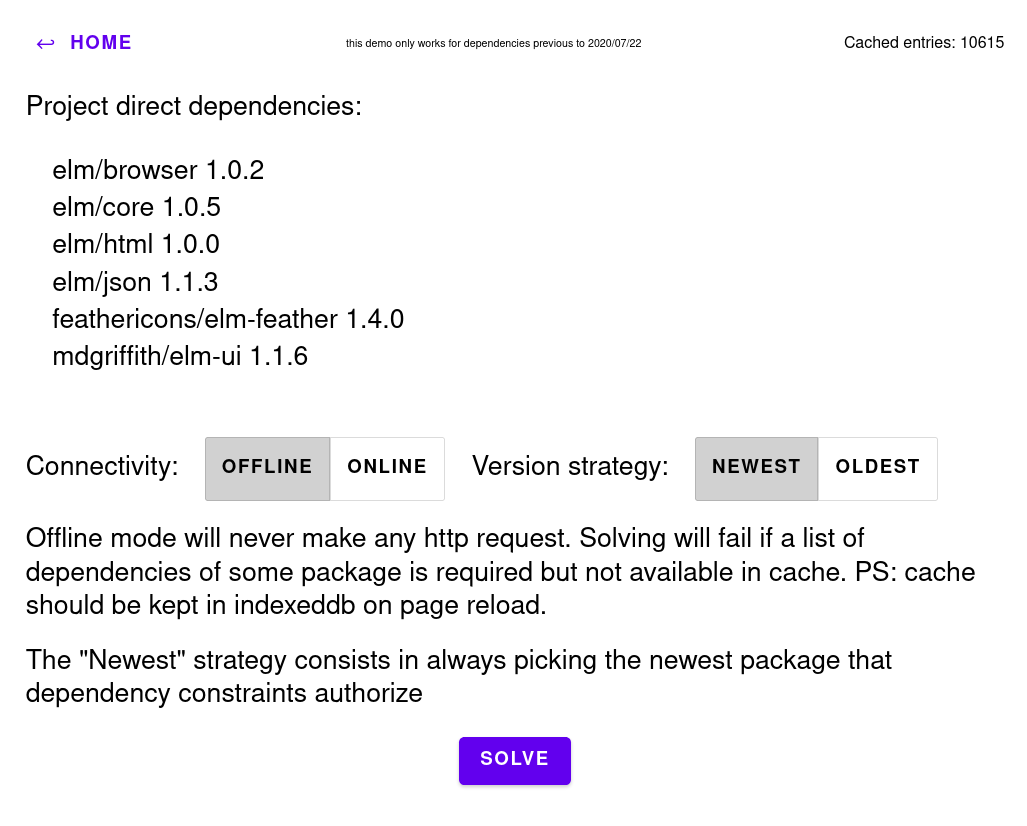 The algorithm is provided in two forms, synchronous and asynchronous. The synchronous API is quite straightforward. The async one uses the Effect pattern to be easily integrated into the TEA architecture. The API documentation is available on elm-doc-preview.

Sometimes, it is too expensive to provide upfront the list of all packages and versions, as well as all dependencies for every one of those. This may very well require some network or other async requests. For this reason, it is possible to run the PubGrub algorithm step by step. Every time an effect may be required, it stops and informs the caller, which may resume the algorithm once necessary data is loaded.

The Effect type is public to enable the caller to perform the required task before resuming. The Msg type is also public to drive the algorithm according to what was expected in the last effect when resuming.

At any point between two update calls, the caller can update the Cache of already loaded data.

The algorithm informs the caller that all is done when the SignalEnd result effect is emitted.

PubGrub is a version solving algorithm, written in 2018 by Natalie Weizenbaum for the Dart package manager. It is supposed to be very fast and to explain errors more clearly than the alternatives. An introductory blog post was published on Medium by its author.

Really cool works! Thank you for your effort on that!

I may add that currently the code base still have 3 instances of Debug.todo and that is the main reason why I did not publish it yet. Those todo are there because of branches that should never happen. It would be awesome to have more usage of the code to confirm that those can be replaced by something publishable. So don’t hesitate to use elm-pubgrub for your project before publication and make sure to report an issue if you find a case triggering those.