Azimutt - Explore your database, thanks to Elm ^^

However, I have some issues finding “paths”. I tried with the “wordpress” example, and the app fails finding a path between “users” and “posts” (whatever the direction of the search).

Hi @sebbes
Thanks for your feedback, indeed, the “find path” feature is built using foreign keys, but the wordpress schema doesn’t have any (

), even if they do joins, they are not structurally enforced by the database schema.
One thing I plan to fix that is to allow users to declare some links manually so the find path could use them.
If you want to try this feature, use the gospeak.io schema, or your own (if it has foreign keys)

Hey @loicknuchel, I mainly wanted to add some praise. The app seems really well thought out, particularly the control you have over what to include in the diagram and the ability to save different views. This feels like the workflow I never knew I wanted until trying it just now.

One niggle I ran into was that there were many errors parsing the schema. None of them were important in terms of exploring the schema but I was left with a lot of notifications to close on the right. A close all button would be really nice.

edit: for convenience I added an issue, https://github.com/azimuttapp/azimutt/issues/17. If you think it’s a good idea I’d be happy to add it myself (not quite sure how the ux would work so open to suggestions here).

Hu @opsb, thanks a lot for your kind words. It means a lot to me as it shows it didn’t code only for myself a strange app ^^
Do you mind if keep your words for some testimonials ?

Thanks a lot for the issue and the PR proposal, it’s very welcome

Don’t hesitate to reach out if you have any question about the code. And if you have some improvement suggestions, they are also very welcome (this is my first Elm app ^^).

Hey, yep very happy for you to use my words and I’ll take a look at adding the PR tomorrow.

Nice! Really beautiful app and it works quite smoothly.

I especially like that you can start from scratch and build up the graph with only the tables which you are interested in. In some other tools it’s always quite an info dump.

Speaking of other tools: If you haven’t yet, you should check out Salesforce’ Schema Builder, there might be a few features to steal.

Is there any chance that you extract your graph rendering code into an extra package? I’m planing to build something similar and a graph rendering library would be a great starting point.

Hi @ad-si
Thanks for your kind words

Yep, I started it out of the frustration of other tool that become quite useless when you have 50 > tables (I have 750 right now

Thanks for the link, will definitely check. Is there any specific feature you would like to see ?

Regarding the graph rendering as an external package, to be honest I don’t know… It’s not I don’t want to but I’m not really sure how to do it properly while keeping the flexibility I need for Azimutt and I doubt to find some time for this ^^
But we can definitely discuss about this and if you have a code proposal I would be happy to review it

Is there any specific feature you would like to see ?

Nothing in particular. Salesforce is just quite good at high density UIs. E.g. the curvy connectors (which you probably already have on your radar) and checkboxes, instead of the hard to differentiate eye / crossed out eye would be an improvement.

while keeping the flexibility I need for Azimutt

I might simply start with borrowing some code from you.

Maybe we’ll figure out some synergies along the way!

Nice project! I could see this being a very useful way to document and explore, and potentially collaborate with others on a schema description.

Also may I suggest that you make it clearer which dialects of SQL are supported for schema import?
Seems like Oracle doesn’t work.

Keep up the good work!

Yes, I wanted to do them at the beginning but after noticed they are nicer but not so useful, so I focused more on features. But one day I will work on them

borrowing some code from you

Yeah, feel free. If you see some possible improvements, don’t hesitate to open an issue or PR

Also your suggestions are pretty good, I had some in mind

It’s still early and I focus more on improving UX and smoothness right now but I plan a lot more features like you suggested:

Your point 2 is interesting, what is your use case? Documenting your database? (manually within the app? from imports?)
Can you develop a little bit ?

For SQL dialects, the goal is to support them all but you are right, currently I’m more focused on PostgreSQL and MySQL… But I will add it asap.

Thanks for your answer @loicknuchel !

I’ve tested with the Gospeak.io and I had this result to go from talks → users :

I know this is experimental feature, but here are some suggestions:

Thanks for your message, and indeed, this is for this very reason this feature is still marked as experimental!

The few ideas I have for now:

I think this could improve the UX but it’s still quite far from good one… What do you think about theses suggestions ? Do you have others ?

add a dashed underline on joined tables with a tooltip, so you are notified there is something special and the text appear immediately, not after a few seconds

Yeah, having the tooltip appearing immediately on hover would be really helpful. Because I did hover the line but I didn’t stay long enough on the element and the tooltip didn’t showed up (that means you’d need to track this hover state on the elm side and displaying it with a position: relative property or so).

Another way would be having a > chevron on the left of the line which turns into a v when we click on the line and would “expand” the path vertically.

Also easy improvement with this is to use → and ← UTF 8 arrow, whic looks way nicer than ->

have a default list of fields to ignore (created_by, updated_by, deleted_by and their variants)

I don’t get it, do you want adding a list of ignored fields for all the schema being loaded? What about the schema is written in French (au fait, salut depuis Paris!)? Or use different convention like creator instead of created_by?

About global layout, I’d move the search modal on the left menu (you could have two tabs: “Tables”/“Search”). This way, we can still see all the tables and parametrize the search accordingly to what we see. (Generally speaking, I tend to avoid modals since they break the “flow” and hide data; e.g. what if there is a long and complicated field I’d want to ignore in the search and I want copy paste it from the table? I’d need to close the modal, copy the field, reopen the modal and paste it).

Last thing: are you aware the “deepth limitation” in the doesn’t work (I know, this is experimental feature, but I prefer to warn you)?

Thanks for your suggestions, I did some improvements: 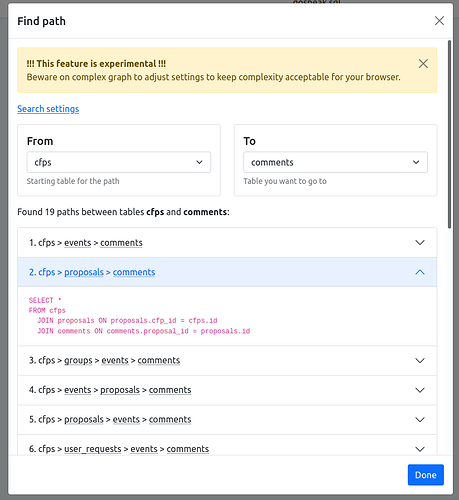 Regarding the search itself, prefilled ignored fields will only be the default value (to catch common cases), but anyone can change it depending on their needs (no way I can guess what is relevant or not ^^).
About the path length, it’s limited to 3 by default but you can change this in the settings (at the beginning of the modal)
I agree modals are not a very good UI, they were the easy way to get my features out and have feedback, now I take more time to improve them

Would be happy to have your feedback on my (small) improvements

PS: for the tooltip I currently use Bootstrap so they are not related to my Elm model, but I’m transitioning to Tailwind with a goal to have them (among other things) in my model. Do you have an idea how to do that? Send a message with an id to know what is hovered ? (I do that for columns but I’m not sure it’s very efficient)

Your point 2 is interesting, what is your use case? Documenting your database? (manually within the app? from imports?)

Yes. A common use case is that we have some vendor database(s) that we are trying to make sense of and build a knowledge base for over time. We want to build a model of how tables relate to each other, and to annotate the meaning of certain fields, etc. It would inform new queries and views that we would create.

I see your app as potentially being the tool that we could do that with. Especially if it had collaboration and code-gen features at some point in the future.

Hope that helps illustrate the use case.

I totally get your point, thanks!

About collaboration and code-gen, this is planned. But clearly not in the near future as I’m looking to expand the primary use case which is exploring and understanding a schema (except if I had a lot of requests for this, I could adapt the roadmap ^^)

Yeah, that’s way better ! Nitpicking: the tooltip sometime wrap and takes 2 lines, would be great having some white-space: nowrap; in the tool tip.

About the path length, it’s limited to 3 by default but you can change this in the settings (at the beginning of the modal)

Thing is I have really long path, greater than 3, e.g.:

About the tooltip, actually, there might be a way displaying it only using :hover pseudo property (the same for the highlight of your columns). Though, doing so will force you rendering all the tooltips in the DOM which can result in a big node number, which might result in performance bottleneck. Otherwise, what you describe would be the way I’d go.

@opsb Hi, I updated the https://azimutt.app landing page with you words, feel free to ask for any change if you want to.

@bogdan-k I plan to add manual relations this week, I hope you will like them

For annotating tables, columns and relations, I will be for next week if everything goes weel

Last week I also added a group selection feature, so now you can select a few tables (ctrl+click or area selection) and move them all together or zoom on them