I have been following the a tutorial in order to build elm 0.18 onto my raspberry pi. The tutorial is found here: https://dev.to/danielkun/using-elm-on-a-raspberry-pi-42pi .

Once time came to build the elm library, it seems that the cabal package manager was unable to find the the appropriate packages for elm 0.18. In fact, the lastest version i see in the package repository is elm 0.15 (over here: http://hackage.haskell.org/package/elm-compiler). Were the 0.18 libraries taken down from Hackage? If so, why was this done?

In any case, if anybody has an alternative solution for how I may get elm 0.18 onto my raspberry pi, I am open to suggestions.

As far as I know, 0.16 and above was never published on Hackage. You’ll probably need to build the compiler from the source. The article you linked explains how to do that for 0.18. It’s changed a bit for 0.19: 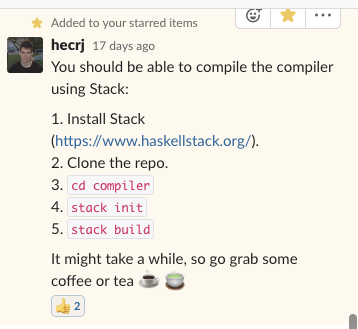 If I recall correctly, it took around 20 minutes to build the first time on my machine (i7 4790k) so I’m curious how a Raspberry Pi will do!

Is your goal just to get Elm working on the device, or do you particularly want to compile from source? I’ve been able to get elm 0.19 up and running on 64-bit ARM processors (not specifically Raspberry Pi though) just by using the packages from Nix. So if you have a Pi with a 64-bit processor that might work for you. They don’t have packages for 0.18 though.

For 32-bit ARM, there was a build of 0.18 for Raspberry Pi posted somewhere a while ago (I’m afraid I can’t remember where) that I used to use successfully on an older ARM based chromebook. I may still have a copy floating around somewhere if you’d be prepared to accept compiled code from a stranger…(!) Or if you search around it may still be available to download from somewhere.

EDIT: Actually I’m pretty sure the 32-bit ARM binaries for Elm 0.18 I have were just extracted from the prebuilt Docker image referenced in the tutorial you’ve been working through! Sorry should have looked at your link first